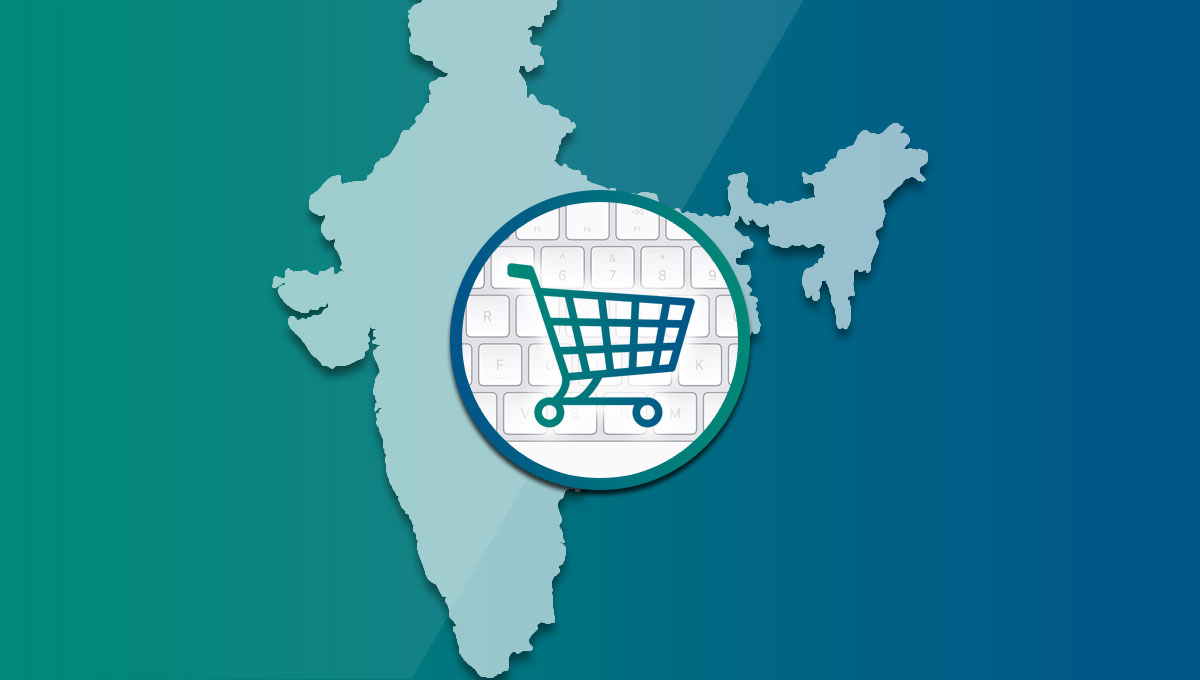 One of the most critical markets for e-commerce, India is a very large and rapidly growing market for online shopping. Even though Amazon has taken the lead, Indian companies, especially pure e-commerce players, are holding their ground and fighting to expand their presence in this fast-growth market.

The Indian internet and e-commerce landscape already counts hundreds of millions of users but it is still far from being mature. With a staggering 560 million internet users, Indian internet users are still only 50% of the total population of 1.37 Billion. Even though India is still a low-income country, Indians are rapidly getting used to e-commerce and its convenience, and they primarily use mobile devices to access the internet and shop online for a growing array of goods and services.

Since the Indian market is still technologically developing, there is much room for growth. However, competition is already very fierce, as many local and foreign players are fighting to grab a hold of this fast developing market. Thanks to its historic success in the United States and other developed countries, Amazon has been able to take the lead in India too, but local players, especially Flipkart which was acquired by Walmart in 2018, still have managed to become solid competitors in this promising market.

However, thanks to the size of the Indian market, many other local companies are still reaching a large audience even though they only take a small share of the market. Most of them pure e-commerce players who have made it by dominating a specific category of products, such as BookMyShow and IndiaMart.

To give you more perspective of the state of the market competition in the Indian e-commerce landscape, here are the current top 10 leaders of e-commerce platforms in India in 2020 and their estimated monthly traffic from SimilarWeb, as of May 2020. 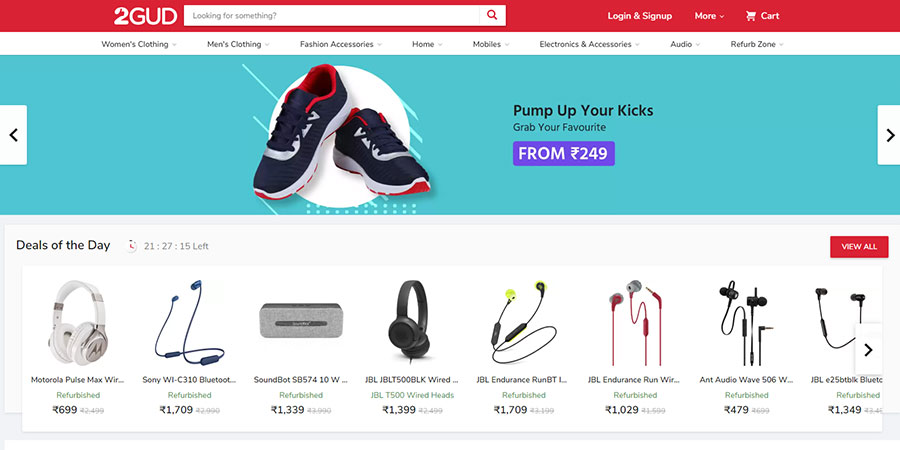 2GUD is originally an e-commerce shop dedicated to refurbished goods, offering a wide range of mobile phones and electronics that have already been used and restored to original condition. Launched in 2018 by Flipkart which was later acquired the American retail giant Walmart, 2GUD has now extended to more categories including lifestyle, fashion, and home decoration to compete against other online platforms. 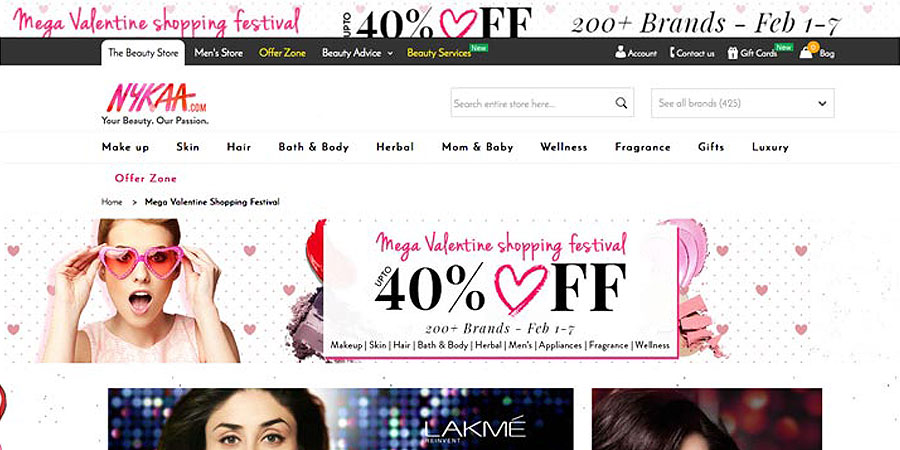 Nykaa is a beauty retailer selling cosmetics, clothes and wellness products to Indian customers. Founded in 2012, Nykaa is originally a specialized store for beauty e-commerce selling products from multiple brands. Since then Nykaa has developed its own line of cosmetics and opened multiple brick-and-mortar stores across India. 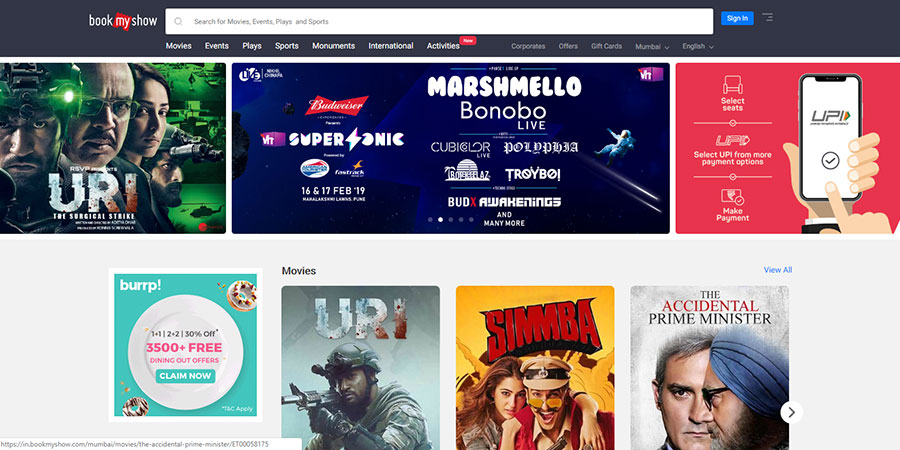 BookMyShow is the leading show ticketing portal and retailer in India. Since its launch in 2007, BookMyShow has expanded to sell millions of tickets every month for movies, sports events, plays, and more. With the company’s success, BookMyShow has also expanded to other, opening subsidiaries in Indonesia, the United Arab Emirates, Sri Lanka, and West Indies. 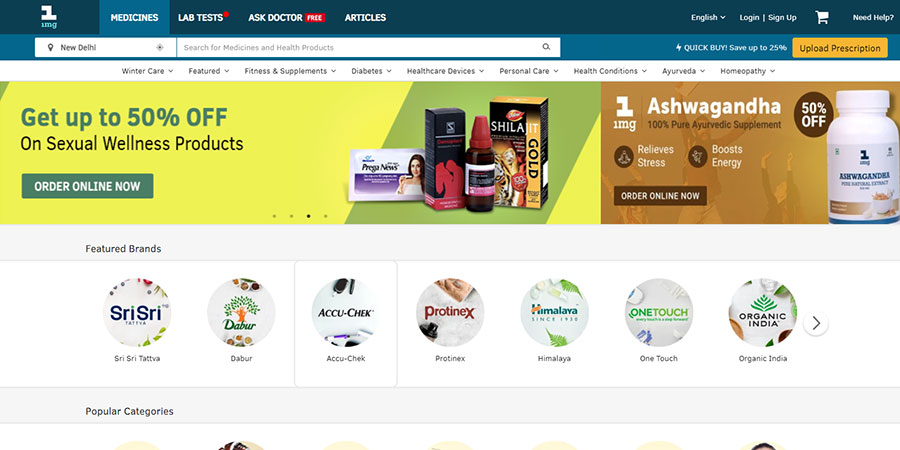 1mg is an online pharmacy and healthcare information website. Founded in 2015, 1mg provides online consultations, lab tests and a mine of medical information in order to better serve the Indian market and population’s need, and be able to direct its visitors to the right medicine or product from its shop. 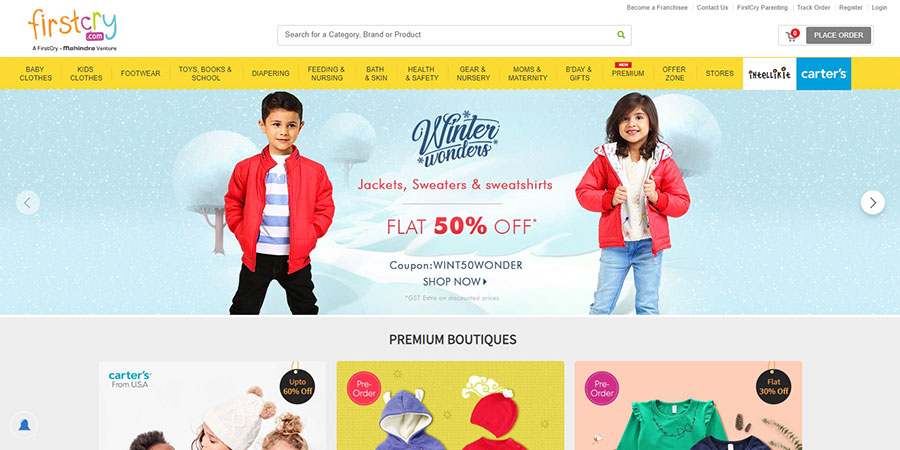 A specialized e-commerce platform for baby care products, kids’ clothes, and toys, Firscry is a pioneer of e-commerce in India offering products from thousands of brands. Having expanded into franchised stores, Firstcry now also offers its products through tens of stores across numerous Indian cities. 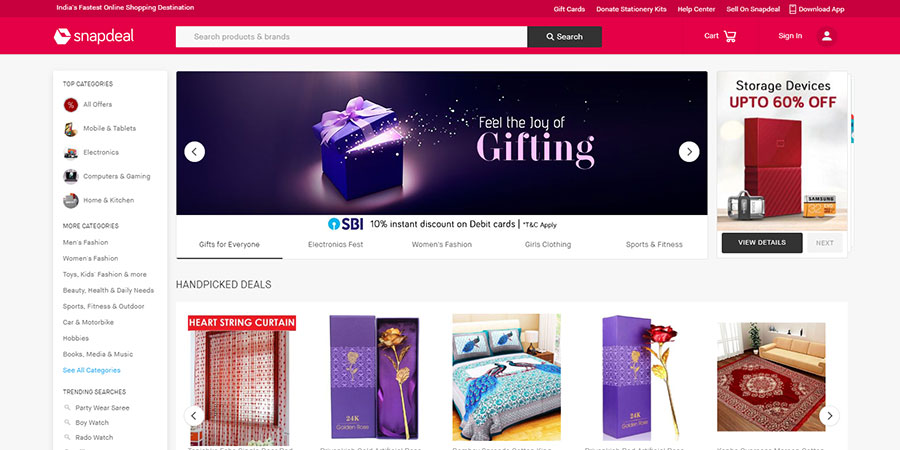 Snapdeal is a diversified online shopping platform, offering products ranging from electronics and fashion to home and appliances. Founded in 2010, Snapdeal has received several rounds of funding from famous investors, including Alibaba Group, Foxconn, and SoftBank, to fuel its growth and compete for the top spots in India’s e-commerce landscape. 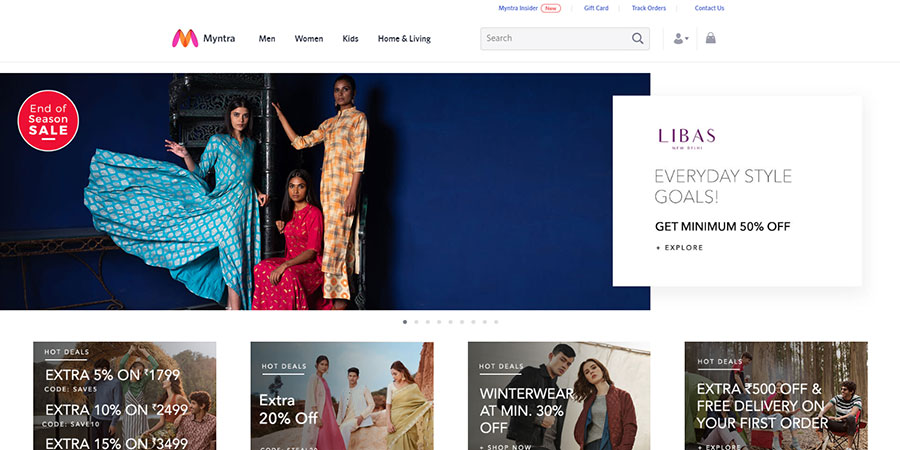 Myntra is a specialized online fashion, home and lifestyle retailer in India. Launched in 2007, Myntra has developed a strong online presence, especially through its mobile applications. Acquired by the Indian e-commerce company Flipkart in 2014, Myntra has consolidated its presence in fashion e-commerce through the acquisition of its competitor Jabong.com. 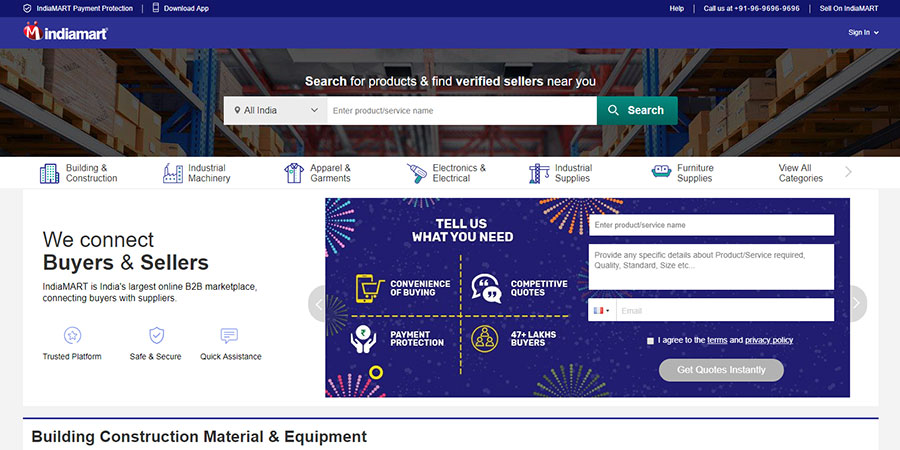 Founded in 1999, IndiaMart is an online B2B marketplace for Indian companies. A competitor of Alibaba, IndiaMart allows manufacturers, suppliers, and exporters to propose their products directly through the platform to get contacted by its visitors. Since 2014, IndiaMart has launched its e-commerce retail platform, Tolexo. 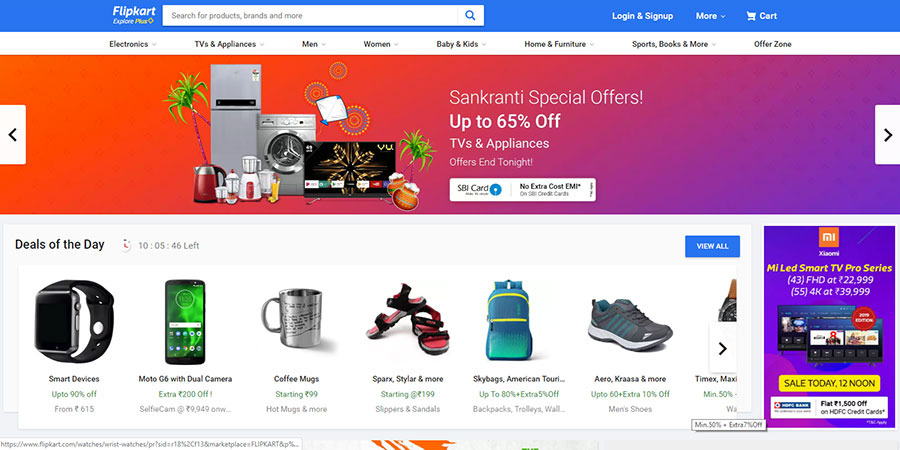 Flipkart is the national leader of e-commerce in India. Founded in 2007, Flipkart was initially selling books, before it expanded to other popular categories including mobile phones, electronics, fashion, and lifestyle products. In 2018, Walmart, one of the largest American companies and leading platforms of e-commerce in the US, acquired 77% of Flipkart for 16 Billion US $. 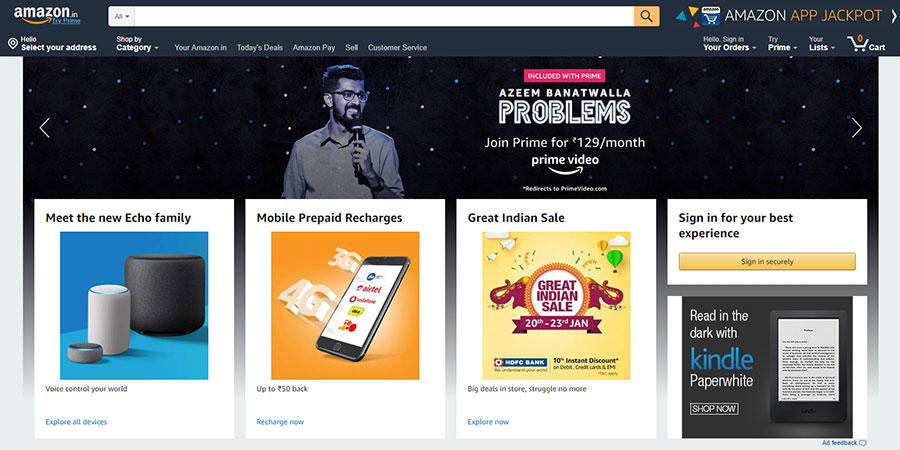 Founded in the US in 1994, Amazon started as an online bookstore that later diversified to products including media, electronics, apparel, furniture, food, toys, and jewelry. Having expanded to many countries, including India, Amazon has become the uncontested global leader of e-commerce and developed further into brick-and-mortar retail with the acquisition of Whole Foods Market, as well as publishing, electronics, cloud computing, video streaming, and production.

The estimated monthly traffic from the top 10 e-commerce platforms previously shows the domination of Amazon and Flipkart, who stands far above the other players, respectively above 200 and 150 million monthly visits. The pack of followers is very uneven, in the range of traffic volumes from 5 to 50 million visits per month. 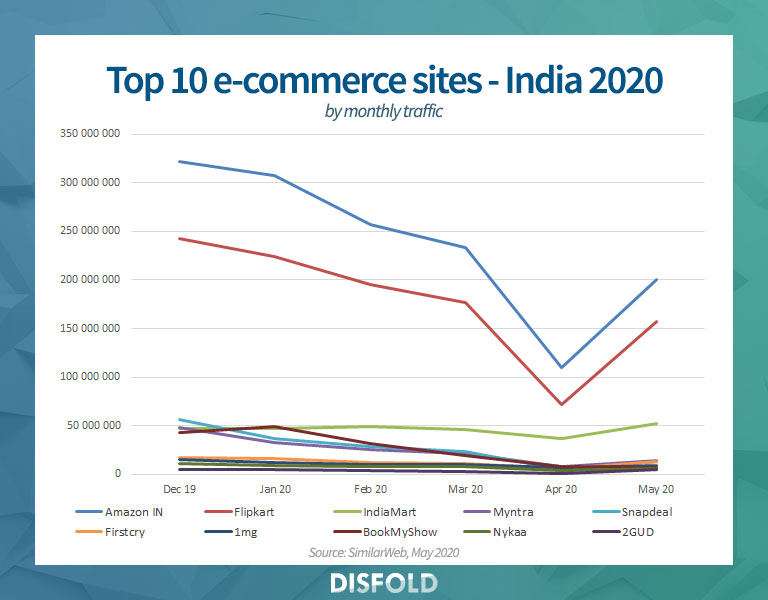 Besides these platforms operating through a wide array of products, some brands can also be highlighted for particularly standing out, thanks to their large reach of the Indian online audience. Even though they operate in the tourism industry which is not in the pure delivery of products, MakeMyTrip and Yatra still manage to make a lot of sales of transportation services on their websites, with over 6 and 2.5 million visits per month respectively, even in the time of the Covid-19 pandemics and its lethal effect on tourism.

Here are the top e-commerce platforms in India. Have you ever bought goods or services from them? How was the experience, is the price cheaper and the delivery convenient? Let us know in the comments below!