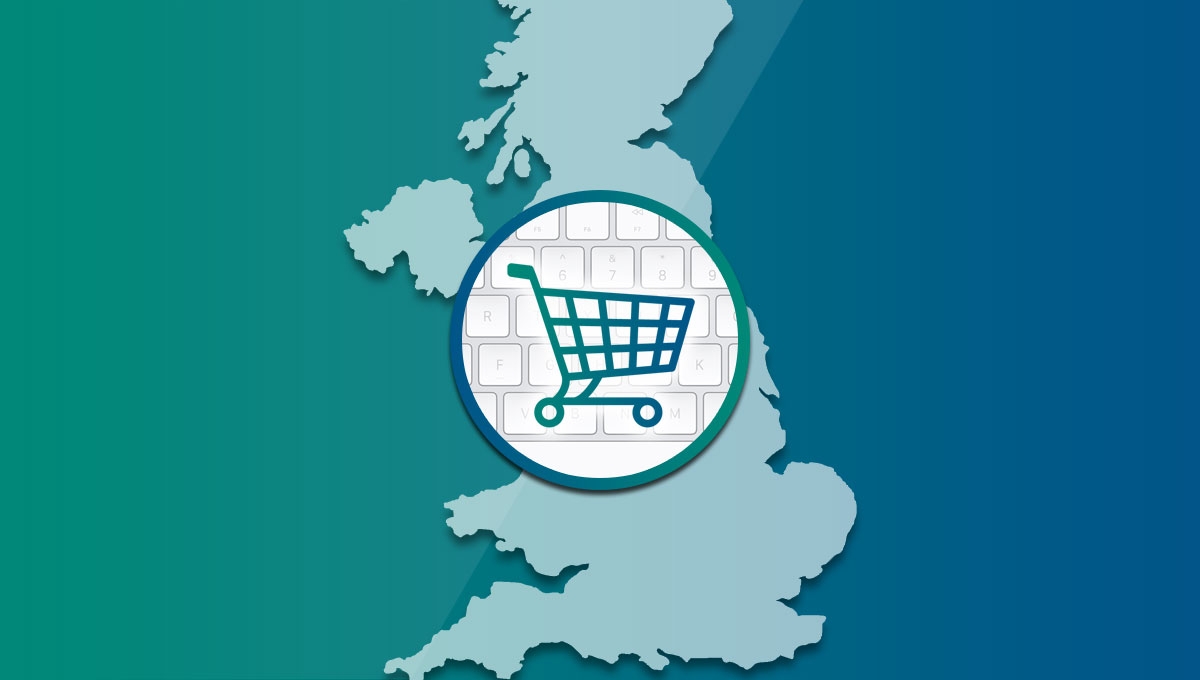 One of the world’s most dynamic countries for e-commerce, the United Kingdom is a rather large and very solvable market for online shopping. Dominated by American e-commerce companies, the UK still has some space for some strong, local companies, both established traditional stores, and pure e-commerce players.

The British internet and e-commerce landscape can be compared to the United States: even though it only has 67 million internet users, a fraction of the US digital population, the wealth of the Brits, and their habits of using e-commerce make the UK one of the world’s most sophisticated e-commerce market. They use both computers and mobile devices for online shopping, purchasing a wide array of goods and services on the internet.

Since the UK market is technologically advanced, with high penetration and solvency, competition for online spending is very fierce. And given that American companies have developed an advantage thanks to their home market size and early development in the UK, British e-commerce is under the domination of US platforms that operate through multiple segments, especially Amazon and eBay, which are by far the largest e-commerce players in the UK.

However, some traditional brick-and-mortar retailers focusing on specific categories, like Argos for electronics and home equipment or B&Q and Screwfix with tools and hardware, are still able to take a share of the market. Some key British food and grocery retailers, like Tesco, have been able to make a mark through online selling, even though Asda, owned by the American retailer Walmart, is also a close contender in this digital segment.

To give you more perspective of the state of the market competition in the British e-commerce landscape, here are the current top 10 leaders of e-commerce platforms in the UK in 2021 and their estimated monthly traffic from SimilarWeb, as of June 2021. 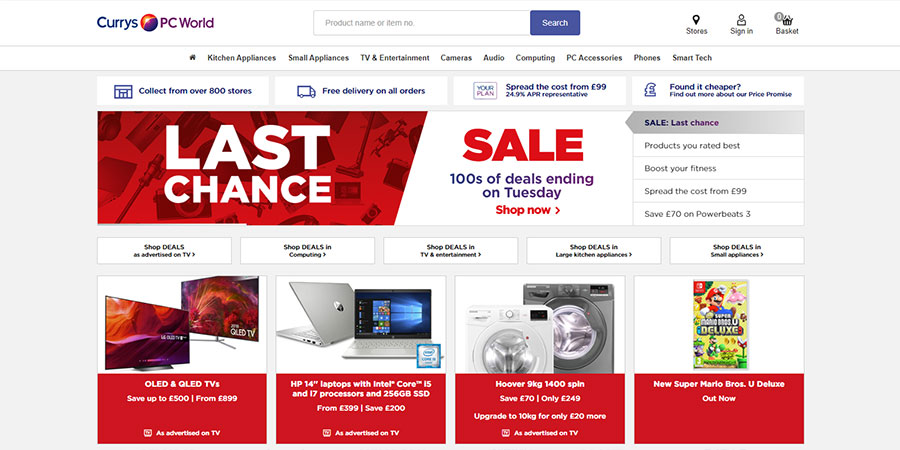 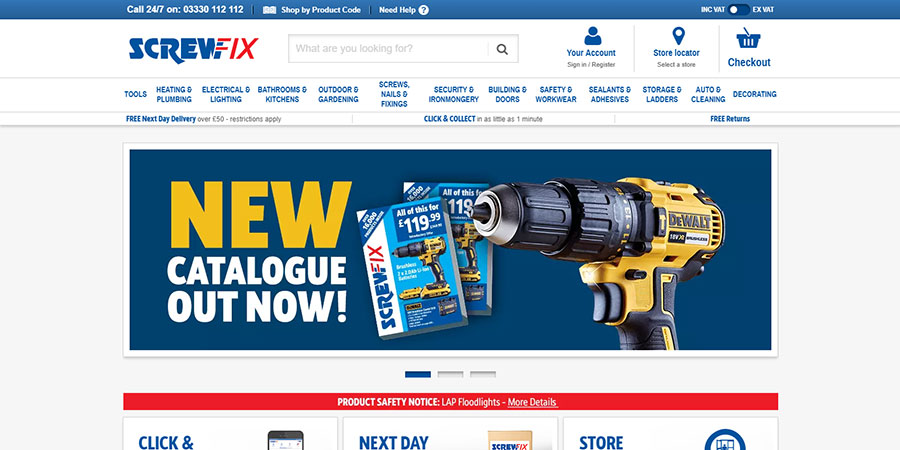 Screwfix is a specialized retailer of trade tools, accessories, and hardware products. Founded in 1979, it has become the leader in the United Kingdom’s, operated more than 600 stores across Great Britain and Northern Ireland. Screwfix has also developed online, offering and delivering its products across the UK, Ireland, and Europe. Screwfix is a subsidiary of Kingfisher plc. 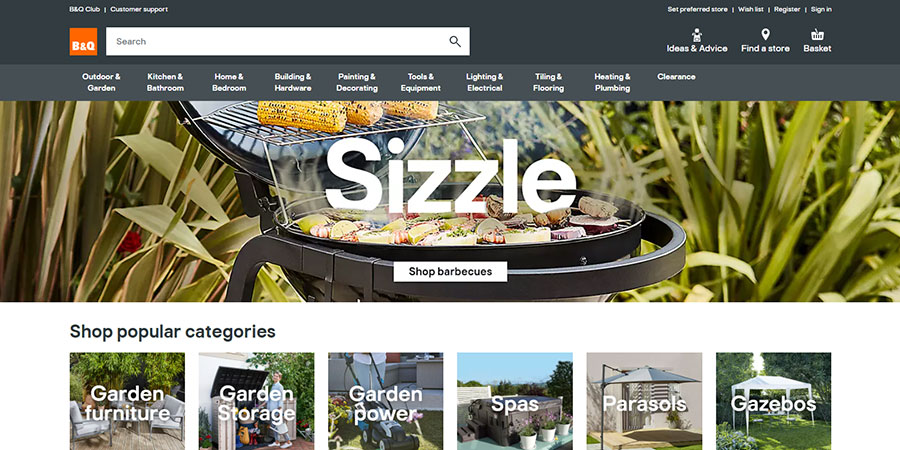 B&Q is a British multinational DIY and home improvement retail chain. It provides a range of products including DIY home improvement tools and supplies, indoor and outdoor furniture and equipment, gardening supplies, and plants through more than 300 stores across the UK and Ireland and its online e-commerce platform. B&Q is a subsidiary of Kingfisher plc. 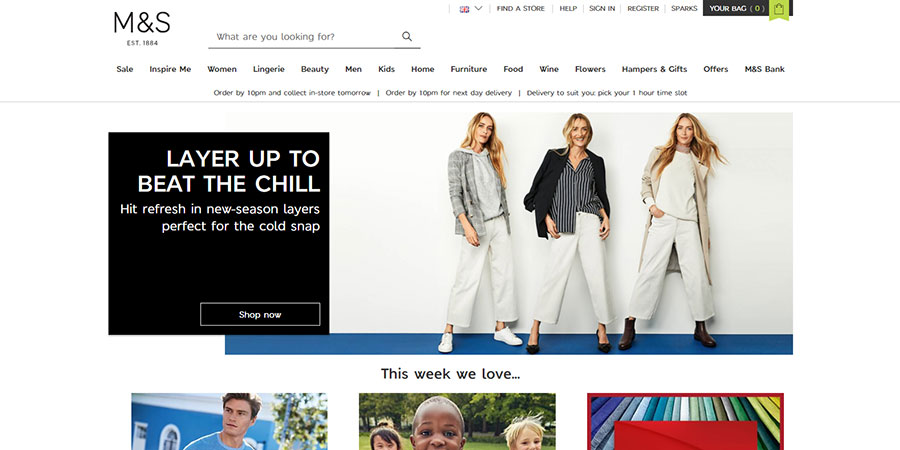 Marks & Spencer is a leading retailer that specializes in selling clothing, home products, and luxury food products. Founded in 1884, Marks & Spencer is firmly present in the UK and Ireland. To further its growth M&S has launched a new round of development by opening brick-and-mortar stores in Europe and Asia as well as selling online through its own website and with a partnership with German e-commerce store Zalando. 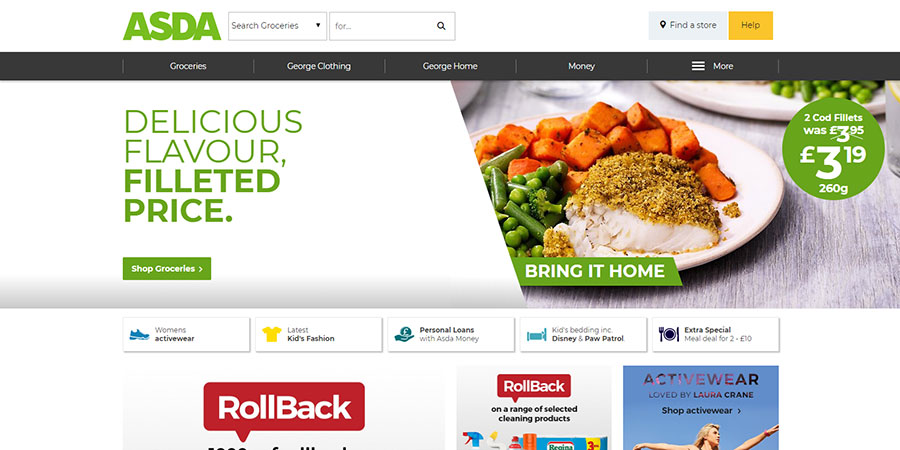 Asda is a leading retailer in the UK, owned by the American retail giant Walmart, who is one of the top e-commerce platforms in the United States. Besides its supermarket where it sells groceries and various consumer, clothing and home products, Asda is also a financial service and mobile phone provider, which are also on offer online through Asda’s e-commerce platform. 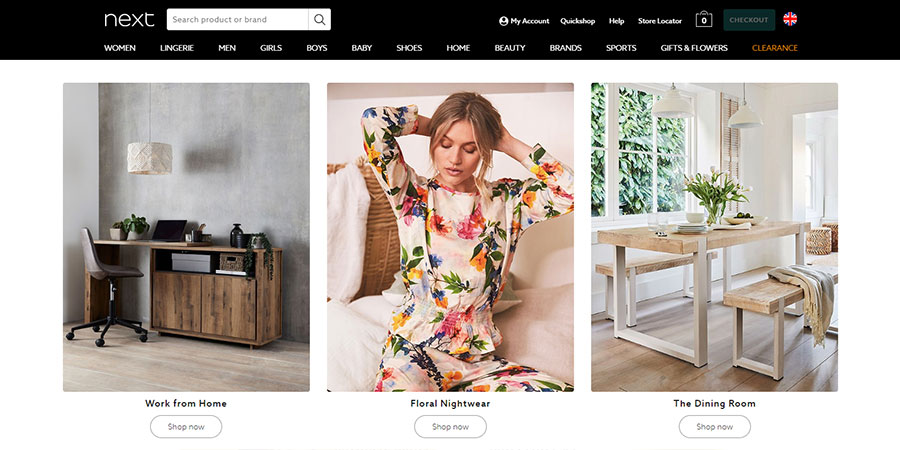 Next is a multinational chain of retail stores selling a range of clothing, footwear, and home products. Tracing its origins to 1864, Next now operates about 700 stores, including around 500 are in the United Kingdom, and around 200 stores across Europe, Asia, and the Middle East. It also sells products of about 400 brands through its online store. 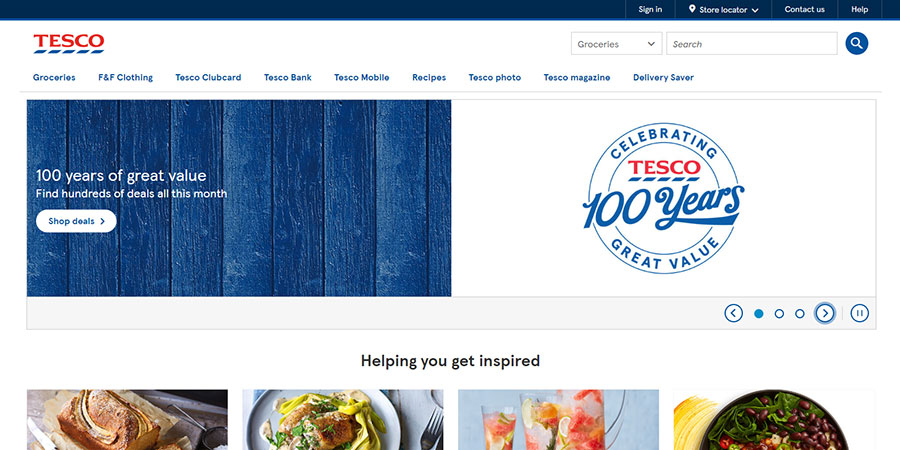 The world’s third-largest retailer and one of the largest companies in the UK, Tesco operates hypermarkets and convenience stores. Through its brick-and-mortar stores and its e-commerce platform, Tesco sells groceries, home and hygiene products as well as clothing, and financial and telecommunications services.

Argos is a catalog retailer also operating more than 800 shops in the United Kingdom and Ireland. A subsidiary of the British retailer Sainsbury’s, Argos sells electronics, home and garden products, clothing, toys and sports equipment, and more. Besides its more traditional operations, Argos has also become a leader in e-commerce in the UK. 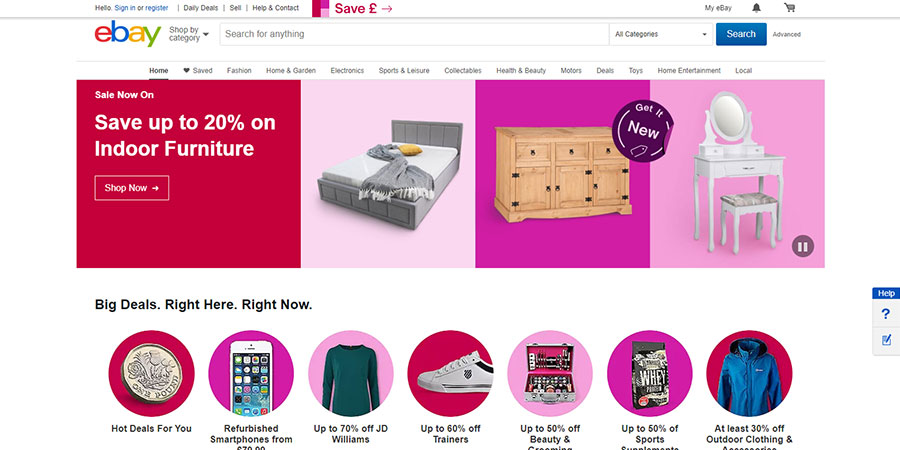 A pioneer of e-commerce, eBay is an American online marketplace that allows people and businesses to sell directly through its online auction platform. Founded in 1995, eBay has expanded to more than 20 countries including the UK, organizing the sale of products ranging from cars and vehicles to electronics and fashion, home and garden to sports and toys, and even business and industrial products. 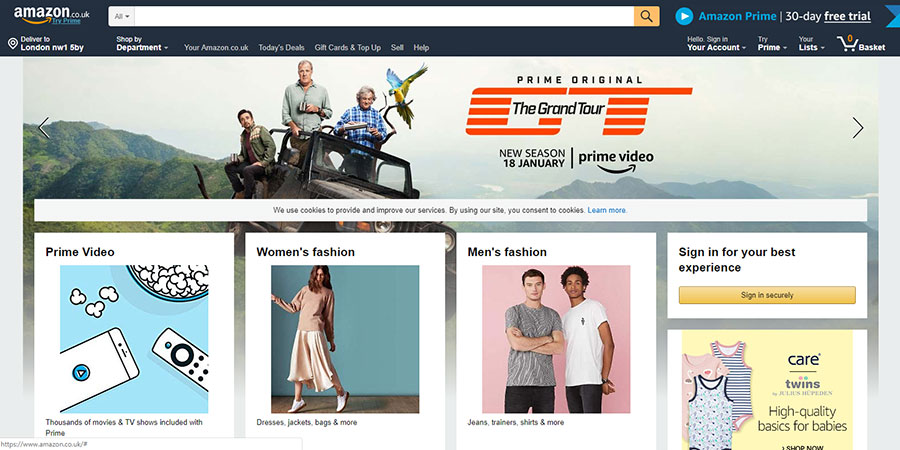 Founded in the US in 1994, Amazon started as an online bookstore that later diversified to products including media, electronics, apparel, furniture, food, toys, and jewelry. Having expanded to many countries, including the UK, Amazon has become the uncontested global leader of e-commerce with the world’s largest sales and profits. It develops further into brick-and-mortar retail with the acquisition of Whole Foods Market, as well as in publishing, electronics, cloud computing, video streaming, and a number of other businesses.

Top e-commerce websites in the UK compared by monthly traffic

The estimated monthly traffic from the top 10 e-commerce platforms previously listed demonstrates the domination of Amazon and eBay, who stand far above the other players, respectively above 430 and 320 million monthly visits. The pack of followers is well established in the range of traffic volumes from 30 to 60 million visits per month. 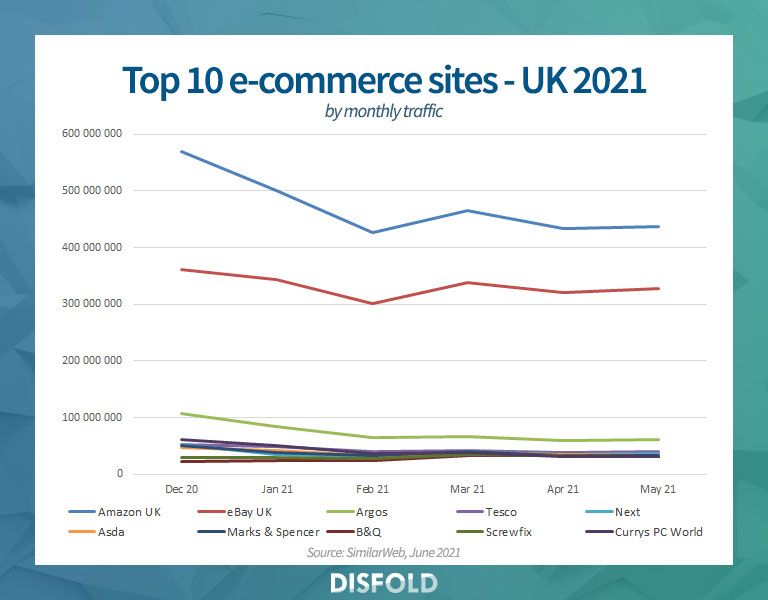 Top brands conducting business through e-commerce in the United Kingdom

Besides these established institutions, another pure e-commerce player in the fashion category can be highlighted for its British origin. Even though Asos has a high, estimated monthly global traffic of more than 80 million visits per month, its estimated share of traffic coming from the UK is only about 24%, which was not enough to rank it in this top 10. However, its presence needs to be underlined here as it still is a leader of British fashion e-commerce, even though its presence is more international than national.

Out of the usual e-commerce platforms, a brand can also be highlighted for particularly standing out through its online presence, thanks to its importance in the British economy. Even though it is not a diversified platform, O2 still manages to sell mobile phones and a range of its own telecommunication products and services on its website. It still weighs quite heavily in the British e-commerce landscape, making large portions of its sales online with over 20 million visits per month.

Here are the top e-commerce platforms in the UK. Have you ever bought goods or services from them? How was the experience, is the price cheaper and the delivery convenient? Let us know in the comments below!

Business Resources for the United Kingdom