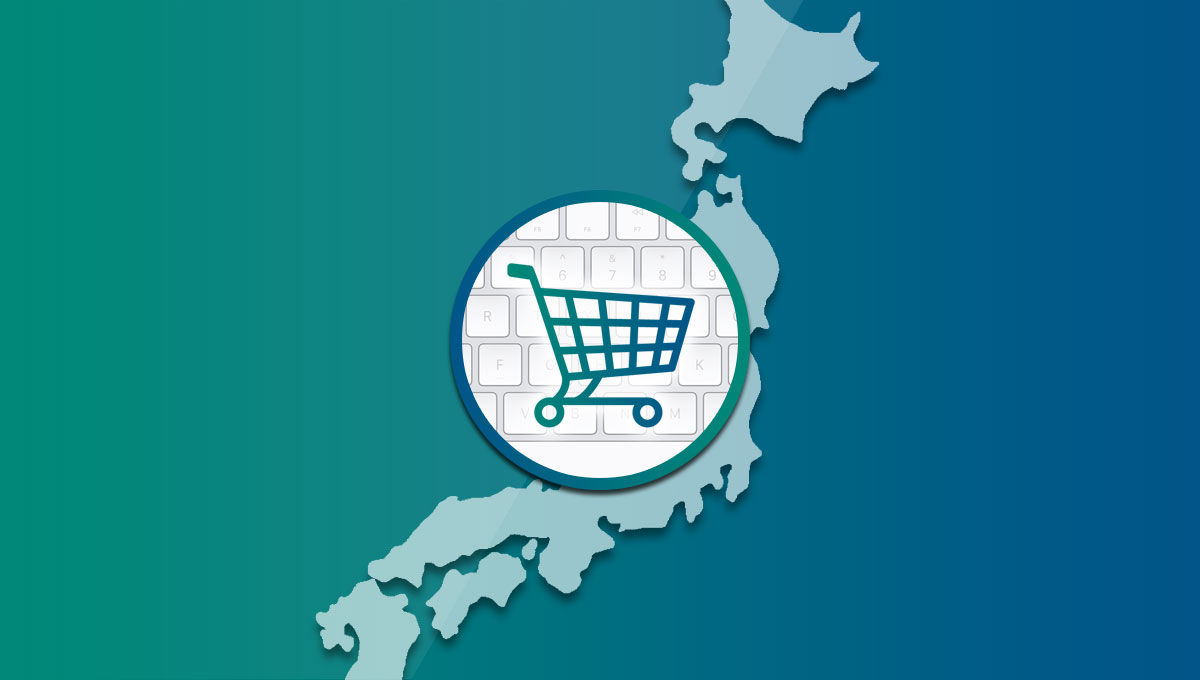 One of the earliest developed countries for online shopping, Japan has become a rather large and very solvable market for e-commerce. With world-leading giant e-commerce companies fighting for the lead, Japan is a place of intense competition for online shopping market share.

The Japanese internet and e-commerce landscape can be compared to the United States: even though it only has 119 million internet users, about 38% of the US digital population, the wealth of the Japanese and their habits of using e-commerce make Japan one of the most developed e-commerce market. Using both computers and mobile devices for online shopping, the Japanese purchase a wide array of goods and services on the internet. 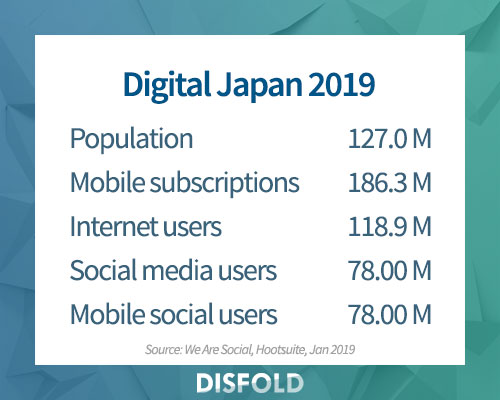 Since the Japanese market is technologically advanced, with high penetration and solvency, competition for online spend is very fierce. Even though foreign companies have gained a strong foothold in the country, with the American giant, Amazon, leading the pack and Yahoo! Japan (which has been taken over by the Chinese e-commerce giant Alibaba) well in place, large Japanese e-commerce companies, led by Rakuten, have also developed a large presence in the Japanese e-commerce landscape.

Some specialized platforms like the online fashion retailer Zozo Town are still able to maintain a share of the market against local and foreign giants. Besides these traditional leaders, a few new apps including second-hand marketplace Mercari also succeeded in grabbing the attention of a portion of online shoppers. The other successful one, Fril, has been acquired by Rakuten and merged with Rakuma, demonstrating that the top of the Japanese e-commerce landscape will remain firmly in the hands of existing players.

For more information on other world-leading e-commerce actors, check our series of posts on Top E-commerce Sites.

To give you more perspective of the state of the market competition in the Japanese e-commerce landscape, here are the current top 10 leaders of e-commerce platforms in Japan in 2019 and their estimated monthly traffic from SimilarWeb, as of September 2019. 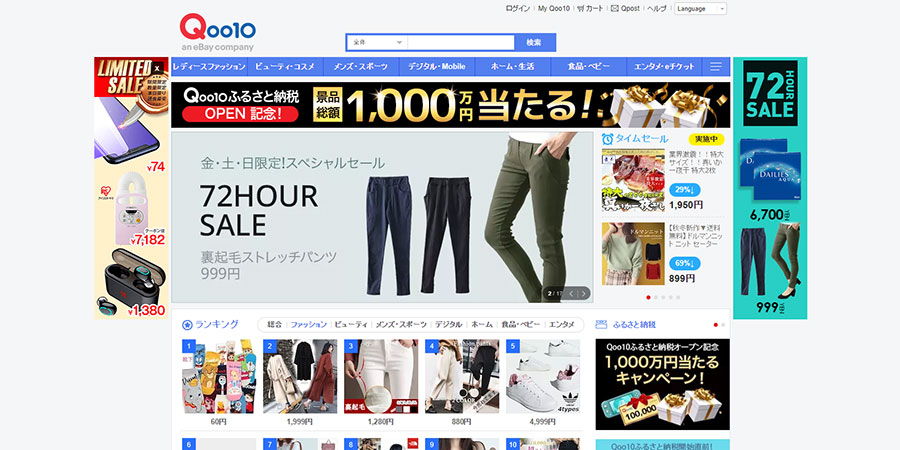 Qoo10 is an online marketplace with a large portfolio of products in fashion, beauty, sports, digital, mobile, home living, life, food, baby, entertainment, books, and e-tickets. Operated by a joint venture with eBay, one of the leaders of e-commerce in the US and the world, after the acquisition of the South Korean site Gmarket, Qoo10 is present in other Asian markets, especially in Korea and Singapore, and aims at expanding to other Asian countries. 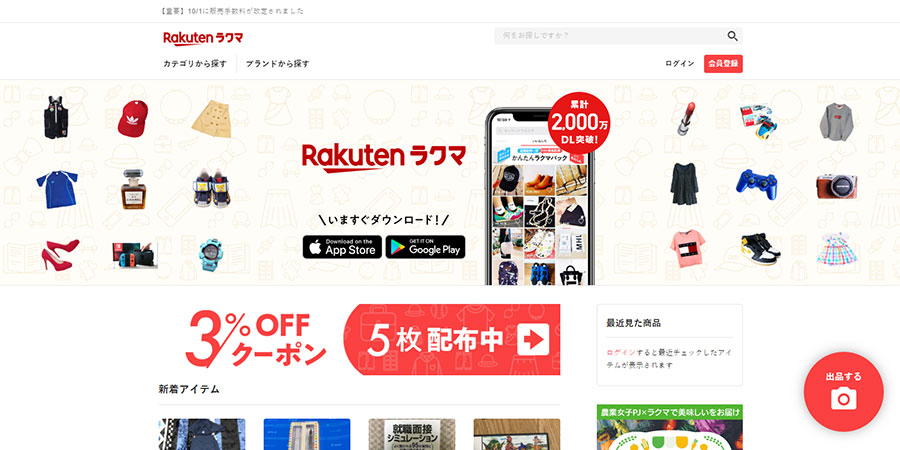 Rakuma is an e-commerce flea marketplace, primarily operating through mobile commerce. Specialized in second-hand goods, Rakuma enables individuals to buy and sell their own items, clothes, electronics, toys, home equipment, and decoration. Rakuma also allows farmers and food producers to sell their products directly on the app. It is owned by Rakuten, which launched Rakuma in 2014 and merged it with its former competitor Fril, following the acquisition in 2018 of its mother company, Fablic. 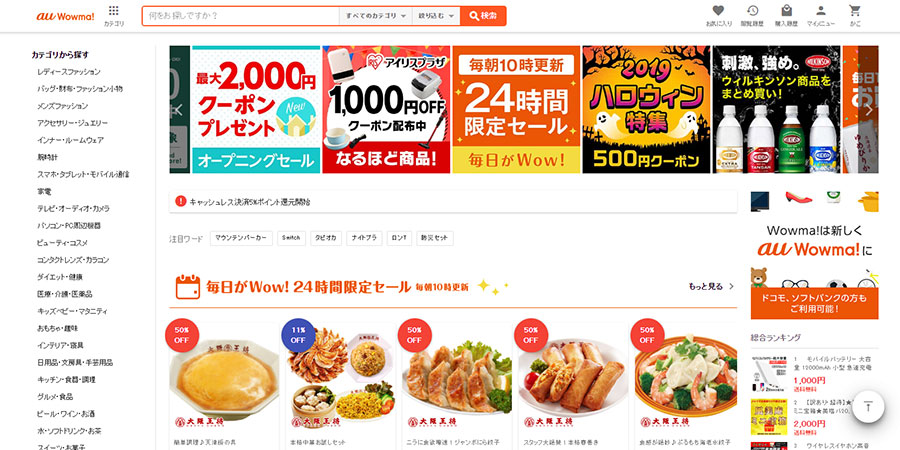 Wowma is a popular online marketplace. With a constant turnover and a catalog of more than 20 million products, Wowma provides a wide choice from a range of categories including, cosmetics, home equipment, and decoration, clothing, electronics, as well as restaurant and personal care services. Founded by the mobile phone company KDDI, Wowma benefits from its mother company’s large share of mobile users in Japan. 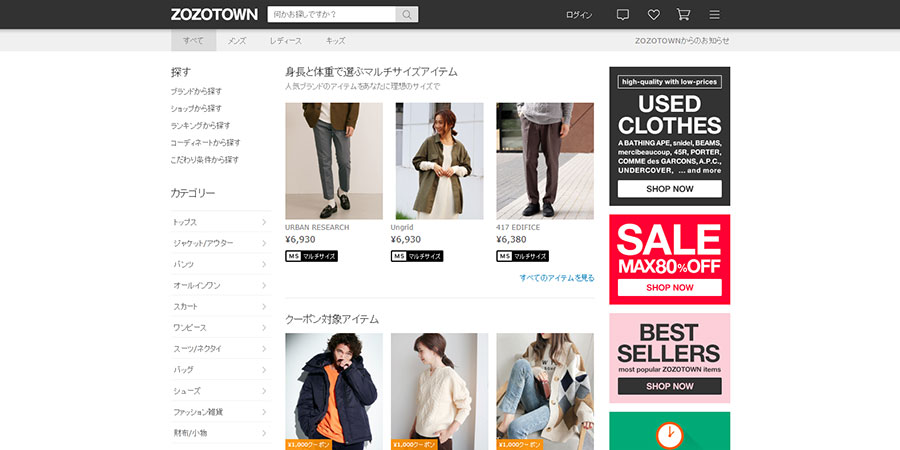 Zozo Town is a specialized fashion and footwear e-commerce platform. Founded in 2004, Zozo Town sprung from a mail-order company, Start Today, and it later expanded to become the largest specialized fashion e-commerce retailer in Japan, providing products from a wide range of local and international brands. The success of Zozo Town has helped the launch in over 72 countries and territories of the custom-fit clothing brand Zozo, and at-home measurement system Zozo Suit. A majority stake in Zozo Town has been acquired by Yahoo Japan in 2019. 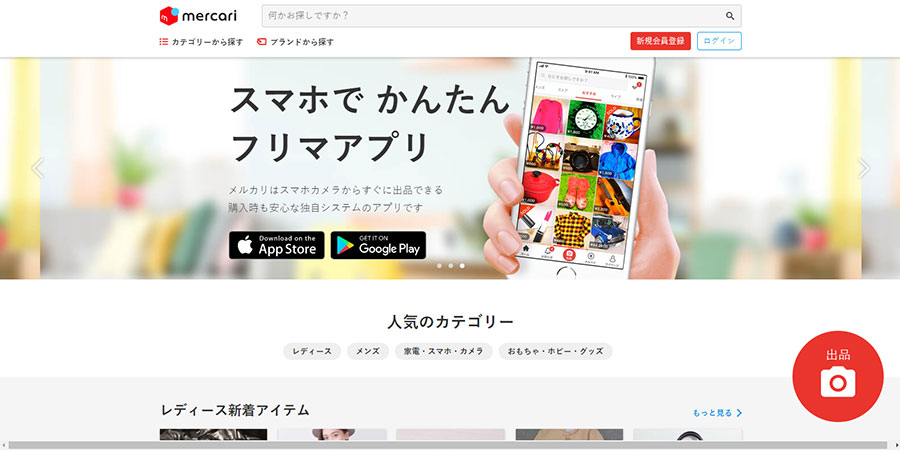 Mercari is a marketplace app launched in 2013 allowing people to buy and sell their own products, as well as famous brands from fashion to toys, sporting goods to electronics, directly from their smartphones. The app notably owes its success to specific features including a live streaming e-commerce channel and the Mercari Now service, that allows users to receive cash instantly for their items. Thanks to its success in Japan, Mercari expanded to the United States in 2014 and the United Kingdom in 2016. 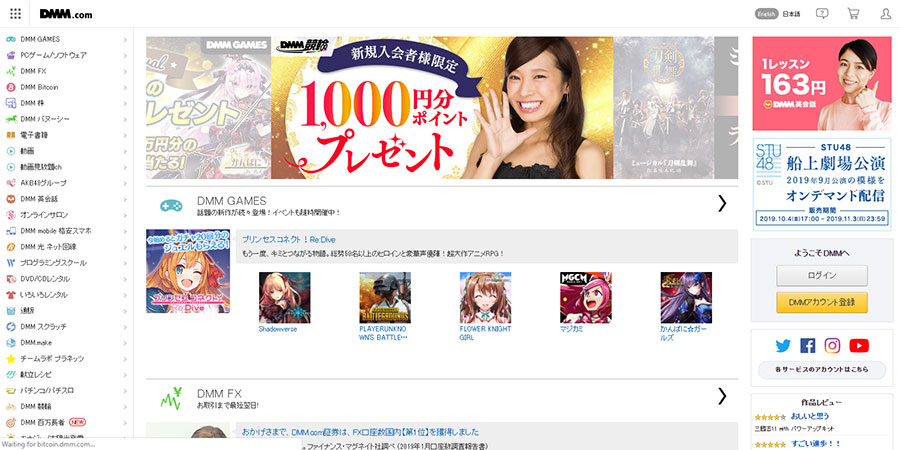 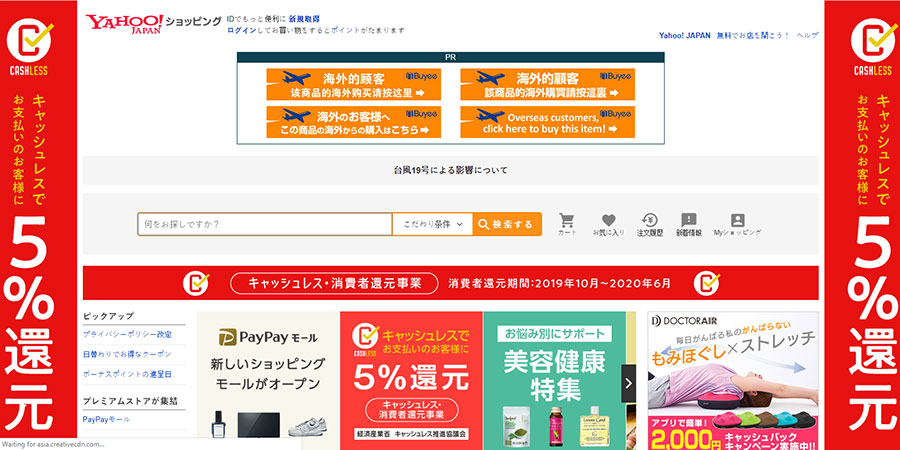 Yahoo! Japan Shopping is the e-commerce store of the diversified web portal of Yahoo! Japan. It provides a wide range of products including, cosmetics, electronics, clothing and footwear, home equipment, furniture, and decoration as well as restaurant and personal care services. Yahoo! Japan is owned by Soft Bank and Alibaba, and its various services are leading the Japanese digital scene. 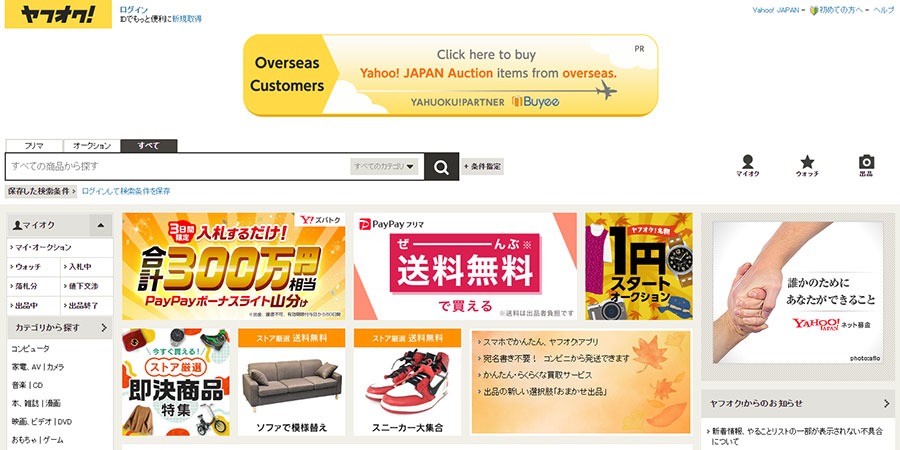 Yahoo! Auctions is the peer-to-peer auctions e-commerce platform of the diversified web portal of Yahoo! Japan. It allows people to sell their own items, such as clothes, footwear, and electronics on the platform to obtain the best price promised by buyers before a final time. Launched around the world to compete against eBay, Yahoo! Auctions has been successfully maintained in Japan, Hong Kong, and Taiwan while it was discontinued in many other countries. 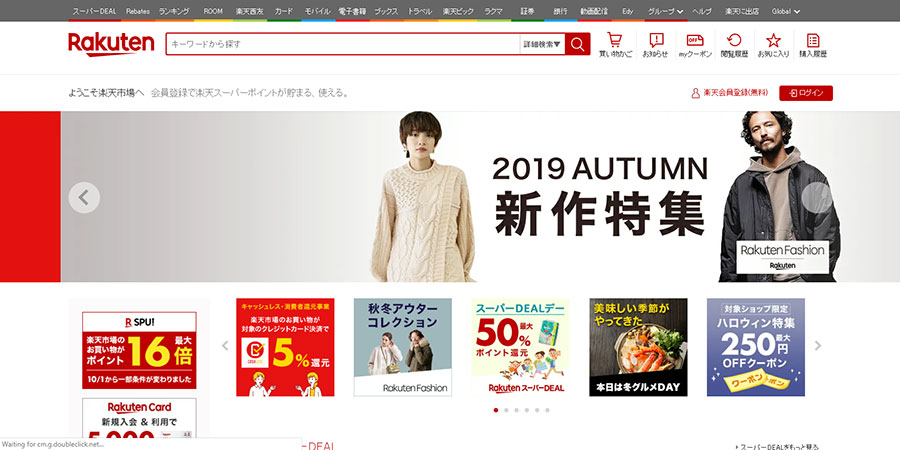 Rakuten is a Japanese e-commerce and online retailing company. Founded in 1997, Rakuten operates a digital marketplace platform where brands can sell their products directly in a wide range of categories, from electronics to clothes and accessories, from home equipment to cosmetics and many more. Capitalizing on its success, Rakuten has expanded to offer other digital services, including online payments, digital content, online marketing, and communications services. It has also expanded globally by acquiring e-commerce platforms in more than 25 countries and investing in various tech platforms. 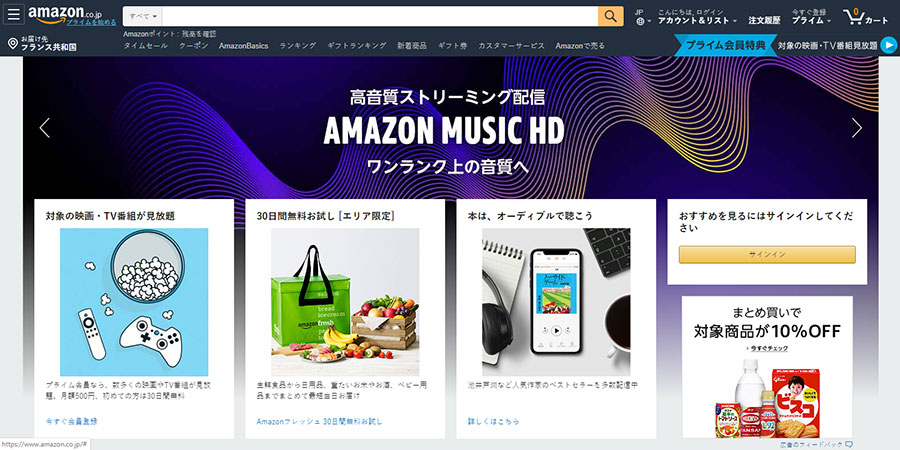 Founded in the US in 1994, Amazon started as an online bookstore that later diversified to products including media, electronics, apparel, furniture, food, toys, and jewelry. Having expanded to many countries, including Japan, Amazon has become the uncontested global leader of e-commerce and developed further into brick-and-mortar retail with the acquisition of Whole Foods Market, as well as publishing, electronics, cloud computing, video streaming, and production.

The estimated monthly traffic from the top 10 e-commerce platforms previously listed demonstrate the clear lead of Amazon and Rakuten, respectively slightly above and slightly below 500 million visits per month. Taking aside Yahoo! Japan auction and shopping which add up to more than 200, the followers are well established in volumes of ten to seventy million visits per month. 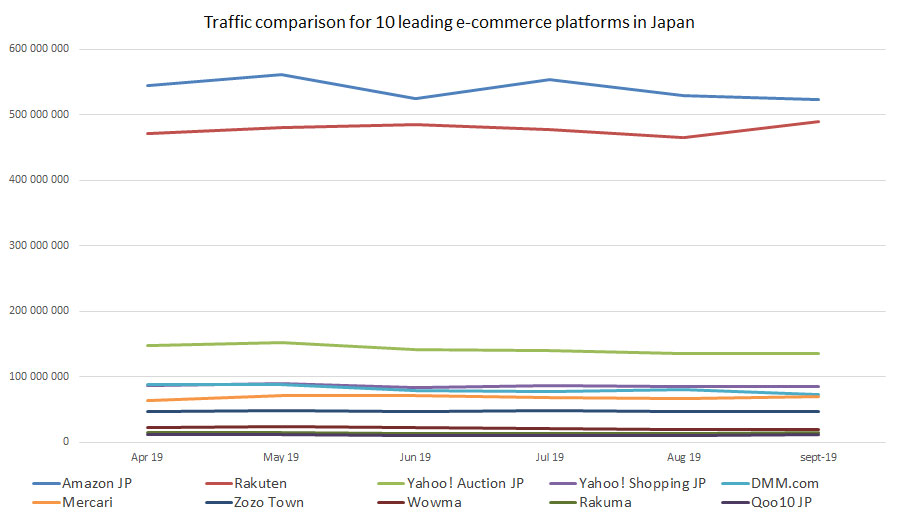 Besides these platforms operating through a wide array of products, a few brands can also be highlighted for particularly standing out, thanks to their importance in the Japanese economy. Even though they are not open platforms, Soft Bank and NTT Docomo still manage to sell mobile phones and various telecommunication products and services on their websites. They still weigh quite heavily in the Japanese e-commerce landscape, making large portions of their sales online with over 40 and 50 million visits per month respectively.

Furthermore, another brand can also be highlighted for particularly standing out, even though it is not purely in the e-commerce market. As it proposes deals, vouchers, and coupons for other e-commerce players, Kakaku is not an online shop in itself. However, it does participate in the Japanese e-commerce landscape by referring to other shops, and with more than 110 million visits per month, it is well worth being remarked here.

Here are the top e-commerce platforms in Japan. Have you ever bought goods or services from them? How was the experience, is the price cheaper and the delivery convenient? Let us know in the comments below!