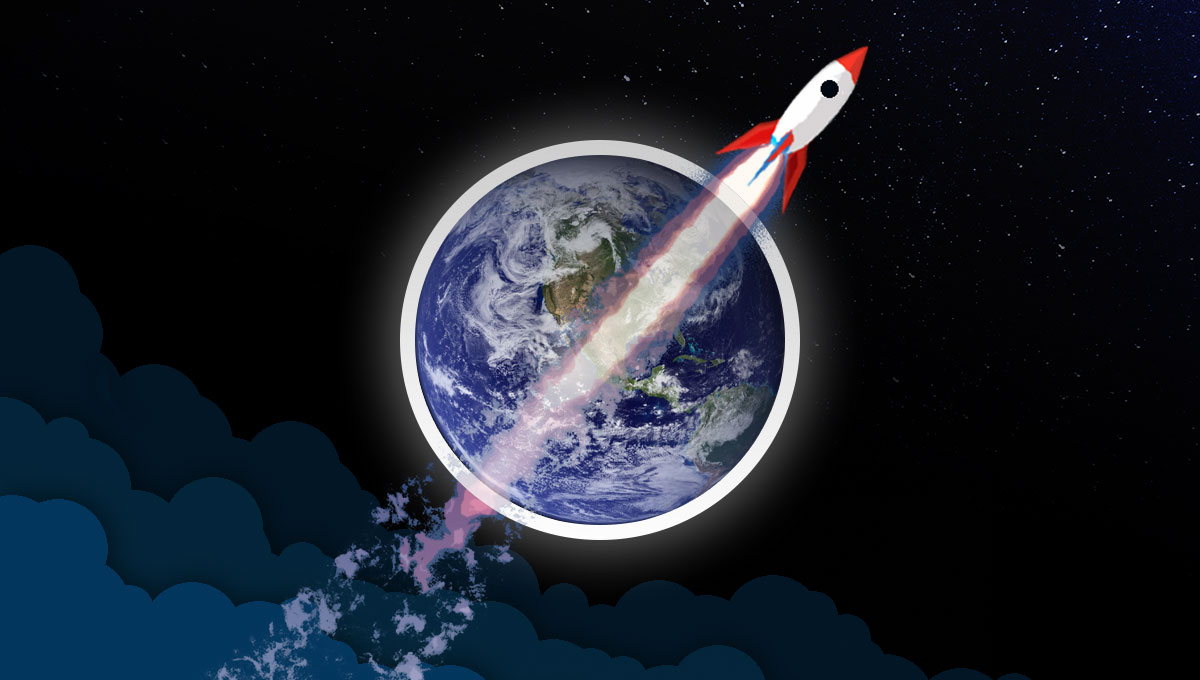 With the entry of private ventures in space and the successful development of reusable rockets, hundreds of startups spur a new era of exploratory and commercial use for space. As a number of new actors challenge traditional ones, space startups now create a wind of change in this new space.

The final flight of the NASA (the American National Aeronautics and Space Administration) space shuttle in 2011 has profoundly transformed how cargo and crew are sent into space and brought to the International Space Station. Relying solely upon Russian capabilities for a time, NASA has awarded the space transportation contract to SpaceX since 2020.

Since billionaire Elon Musk’s space company’s successful development and use of reusable rockets, SpaceX has been able to significantly decrease the cost of sending material and astronauts to space, compared to the previous NASA launchers. This success has pushed a number of other private companies to engage in this new era of space-faring.

Thus a number of private companies have sprung around the world to provide space launching services at a fraction of the cost that was previously prohibitive. Furthermore, new developments in the design of miniature satellites, notably with the CubeSat modules of 10cm x 10cm x 10cm, multiple new uses of satellites and space activity have become cost-effective.

Besides Elon Musk, two other billionaires are also engaged in new spatial travel with their own companies. Jeff Bezos, the founder of Amazon, and his space company, Blue Origin, and Richard Branson, founder of Virgin and Virgin Galactic (which is already a listed company and thus not in the following list) are launching in July 2021 their first sub-orbital space travel flights.

In a domain which has traditionally been led by government-funded space agencies, NASA, the European Space Agency – ESA, the Japanese Aerospace Exploration Agency – JAXA, and serviced by giant aerospace and defense companies, such as the American Boeing, Lockheed Martin, Northrop Grumman or ArianeGroup in Europe, these new space startups and companies have a huge impact to open space to new private activities.

It’s important to highlight the new role of China in this new space race. Not only has the China National Space Administration – CNSA – pushed to develop the country’s space defense and commercial operations, but China also encourages and funds private companies to venture into space. A number of Chinese startups, therefore, make up the rank of the following best-funded space startups.

For the complete list of the world’s unicorn startups, download our 580 Unicorn Startups Excel file which includes valuations, funds raised, known investors, websites link, descriptions, and much more information on each company,

For more information on other world-leading startups, check our series of posts on Top Startups.

Shortcuts to each startup

To facilitate your browsing in this long list, here are quick links to go directly to the details of any of the world’s top 30 Space startups. Be sure to also check the Top 10 Space startups summary after the list!

World View Enterprises is a near-space exploration and geospatial data company. It develops stratospheric balloons and un-crewed flight vehicles for commercial and government customers to collect and use near-space Earth imagery data. World View also provides access to imagery and analytics products for a wide range of industries and applications.

Isotropic Systems is a satellite communication company. It develops antennas and terminals to support satellite broadcast, VSAT, microwave, multipoint wireless, and 5G broadband communications. Thanks to its advances in technology and innovative antenna design, Isotropic Systems aims at enabling high throughput satellites to reach new markets and scale to the mass market.

Moon Express is a space robotics technology for lunar payload services. It provides robotic space landers or orbiters for scientific and commercial exploration of the Moon. Moon Express aims at developing robotic spacecraft to ultimately engage in the mining of natural resources of economic value on the Moon, other planets, and celestial bodies.

Axelspace is a commercial microsatellite developer. It collaborates with customers to design, build, launch and operate microsatellites according to their needs, in a wide range of activities including Earth monitoring, disaster prevention, space, vacuum and microgravity research, and many more. Besides, Axelspace also provides geospatial data imagery through its own satellites, with applications especially focused on agriculture, forestry, and infrastructure monitoring.

Capella Space is a geospatial imaging data provider. Thanks to its constellation of satellites, it provides access to on-demand Earth observation imagery, and analytics solutions to detect changes, automate analysis and integrate workflows. Capella Space provides services to organizations in a number of industries, including defense, maritime, finance, and many more.

LeoLabs is a company specializing in space surveillance. It provides low Earth orbit mapping and space situational awareness services for satellite and debris tracking and monitoring, collision avoidance, launch, and early orbit securing. Thanks to its platform and API, LeoLabs allows customers to use its data directly to supervise their own satellites and space activities.

Kineis is a satellite communication company specializing in data for Internet-of-Things devices. It designs, develops, and operates a constellation of satellites to provide connectivity for the IoT sector. It works with IoT manufacturers and operators, and satellite operators to collect from, and distribute data to devices around the world.

OneSpace is a space manufacturing company and satellite launch service provider. It designs, develops, and manufactures a range of small rocket launchers to put microsatellites and nanosatellites into orbit, together with associated systems and technologies.

Orbital Insight is a geospatial data analytics company. It provides a platform that enables customers to use data from a constellation of satellites to discover, measure, and monitor activity around the world for better decision-making. Thanks to its geospatial and time data, and selection of algorithms, Orbital Insight empowers customers in a number of industries including defense, consumer goods, energy, real estate, and financial services.

Ispace Technologies is a space robotic company for lunar and planetary missions. It designs, builds, and operates landers and rovers for transportation and exploration missions for public space agencies and private organizations. Its goal is to serve customers interested in the exploration and utilization of natural resources of the Moon.

Iceye is a geospatial imaging data provider. It designs, develops, and operate a constellation of satellites dedicated to the collection of timely and reliable satellite imagery, which it then commercializes for governmental and commercial industries, with a number of applications in the industries of insurance, finance, energy, utilities, mining, maritime, civil and defense.

HawkEye 360 is a geospatial analytics company. It is specializing in radio frequency signal location thanks to a constellation of small satellites. Thanks to the precise mapping of radiofrequency emissions, it empowers the operations of public and private organizations in the security and defense, maritime, telecommunications, and crisis response industries.

Isar Aerospace is a space manufacturing company and satellite launch service provider. It designs, develops, and manufactures launch vehicles dedicated to deploying and resupplying satellite constellations. With a focus on small satellites, it provides low-cost and environmentally-friendly space access and orbits for small and medium payloads.

Astroscale is an orbital debris removal company. It develops a range of on-orbit solutions and services to limit the hazard created by space debris and improve the long-term sustainable use of space, including satellite life extension, in situ space situational awareness, satellite end of life, and active debris removal.

Rocket Lab is a space manufacturing company and satellite launch service provider. It designs and develops sub-orbital and orbital lightweight and medium-lift rockets, systems, and technologies dedicated to the low-cost, high-frequency launches required by the emerging small satellite market.

Spire Global is a multinational aerospace and data analytics company dedicated to weather and environment tracking. It designs and develops nanosatellites to monitor the weather and environmental conditions for the maritime, aviation, and weather-dependent industries. It operates from six offices in San Francisco, Boulder, Washington DC in the US, and Glasgow, UK, Luxembourg, and Singapore.

Kymeta is a satellite communication company specializing in solutions for mobility. It develops lightweight and cost-effective satellite tracking antennas and terminals for mobile communications relying upon cutting-edge meta-materials. Its products are ideal for mass volumes communications where traditional satellite antennas are not practical or feasible, such as in the automotive, maritime, and aviation industries for defense, government, public safety, and commercial applications.

Blue Origin is a space and sub-orbital manufacturing and transport company. It aims at reducing the cost to access space with reusable launch vehicles and a wide variety of technologies. Gradually expanding from suborbital to orbital flight with vehicles and rocket engines, Blue Origin now provides its “New Shepard” flight experience, the first weightless suborbital travel to more than 100km above sea level.

SpaceX – Space Exploration Technologies Corporation – is a company dedicated to space transportation aiming at improving the cost and reliability of accessing space by a factor of ten. It designs, manufactures, and launches rockets and spacecraft, especially focusing on reusable launch vehicles. SpaceX has also recently launched Starlink to provide satellite internet access through a constellation of satellites.

To give you a quick overview of the largest Space startups in the world in 2021, here is a synthesizing image regrouping the information of the top 10. Note that you can use this image to embed it on your website and other digital properties using the embed code below. 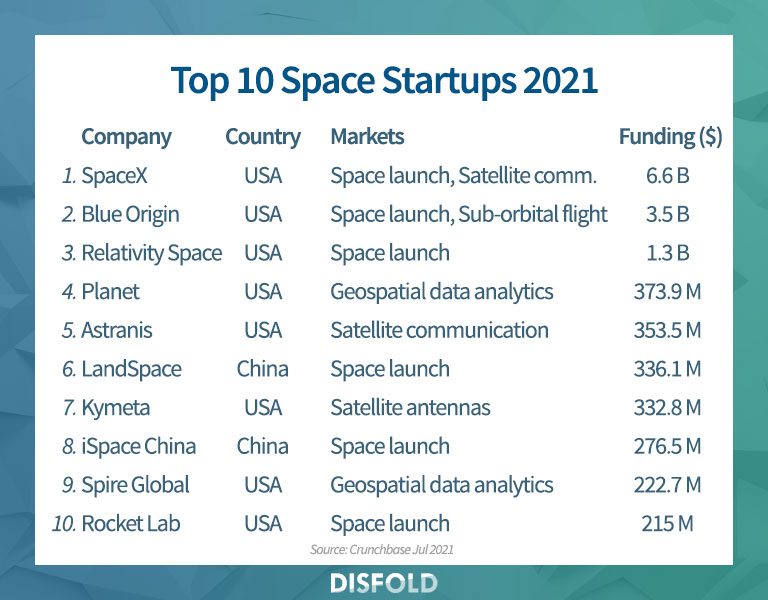 Here are the top 30 best-funded Space startups in the world. Did we forget any? Which one is your favorite? Do you think they will be able to bring humankind to Mars? And beyond? Let us know in the comments below!